I slept hard last night and according to my machine, nearly 9 hours! That was good. I slowly got myself together then read until Victor & Lea were ready to go to breakfast. It was another beautiful day, and we walked to their neighborhood diner called Salt & Pepper. Again, I had the eggs, bacon, potatoes, and toast, though no coffee today for some reason. Yum. We walked back, and though I failed to get a photo with them, I did take a photo of their place. It’s what Victor referred to as a classic New England triple decker. Their place is on the 2nd floor.

I hit the road by 9 am, I guess, destination Cooperstown! I didn’t have a gig scheduled so I was looking forward to a day off. The drive was (only) 4 1/2 hours, but it mostly wasn’t on big freeways, but on winding, twisting roads that were again just truly lovely. Unexpectedly, my route took me through a part of Vermont that included Wilmington that was so stinking cute!

One thing about driving is there is so much scenery, but it’s just not practical to stop and take photos every few miles or minutes. Plus, it’s the kind of thing that’s just really hard to capture.

I stopped in Albany for a break. I must have been on the very outskirts because it looked nothing like a capital city from the section I saw. Oh well. As I got closer to Cooperstown, the scenery was even prettier. It sits at one end of Otsego Lake, and it’s super lovely. Cooperstown itself is a small town, but its main attraction is the Baseball Hall of Fame. Once I got into town, I looked for a place to stay near the HoF. I lucked out and got a room at the Tunnicliff Inn which says it’s 498 feet from the Hall. They’re not lying either. Here’s what it looks like.

I got an upgrade on my room for free so I’m on the 2nd floor (not the 3rd), and the room is lovely. I checked in around 4 pm. The Hall was open until 9 pm so I decided to go that afternoon hoping it wouldn’t be too crowded. But first, I walked down to the lake. Have I mentioned how completely lovely it is here? 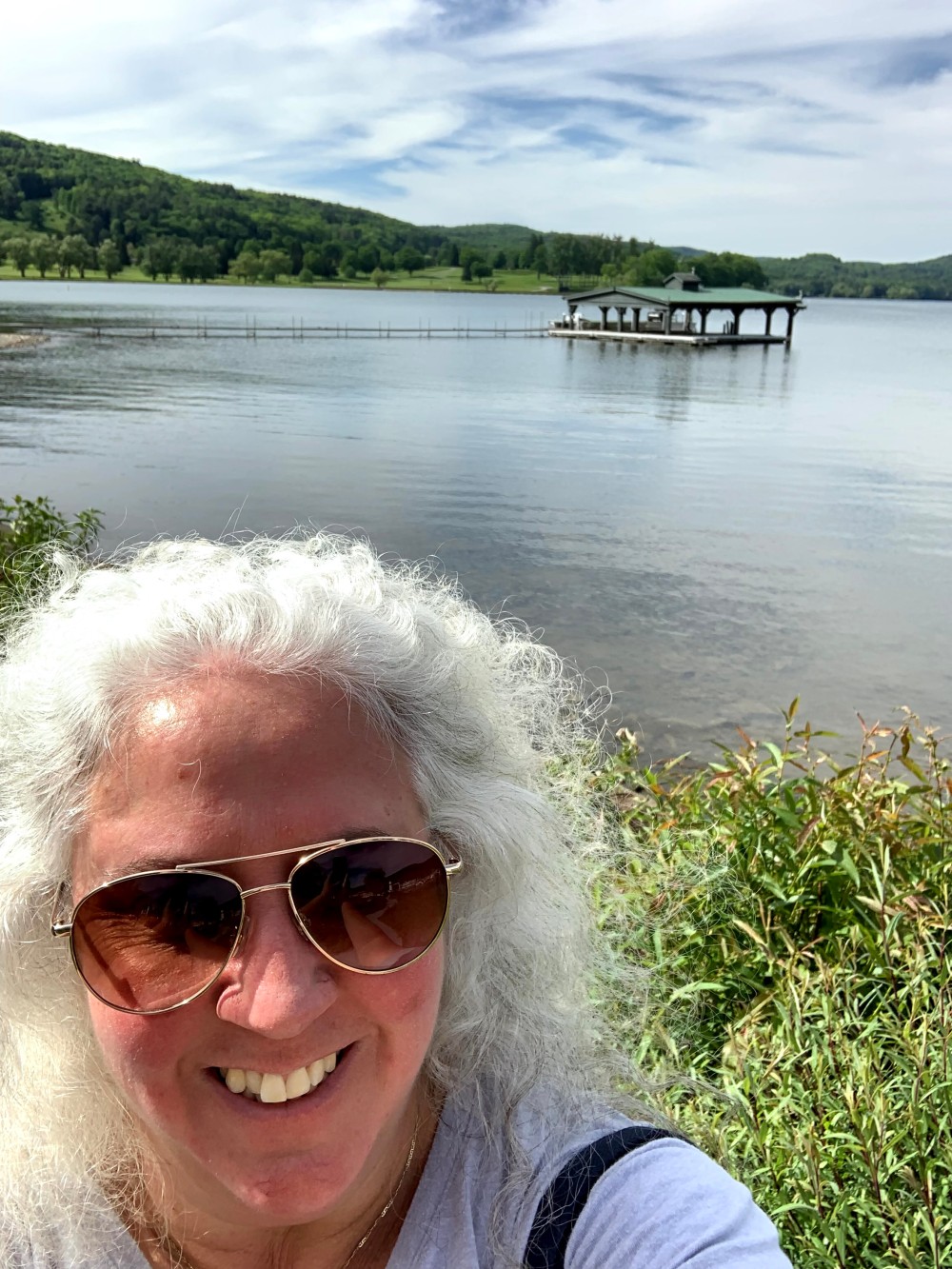 Going to the Baseball Hall of Fame has been a life list item. I enjoy baseball. Not as much as some but more than many. My experience with it is limited to mostly the San Diego Padres, but I know some history. While it was so super cool to be there, it was, after all, a museum, which is not usually something that’s real high on my list of things to do. That said, it was a thrill to be in the gallery of the Hall of Fame and to see all of the plaques of the players who have been inducted. Here are a few photos, 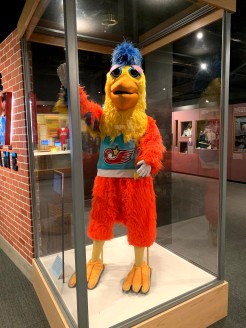 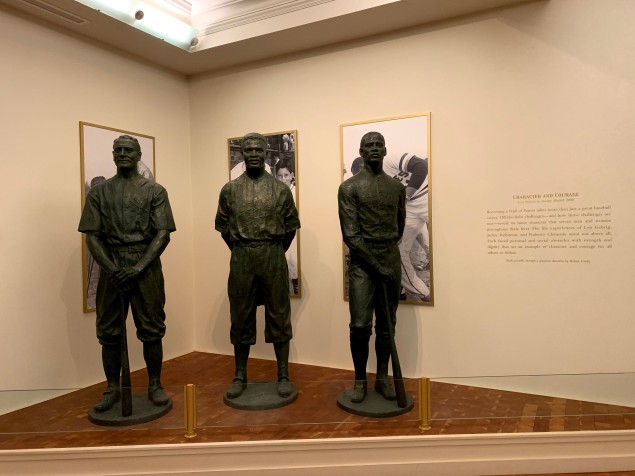 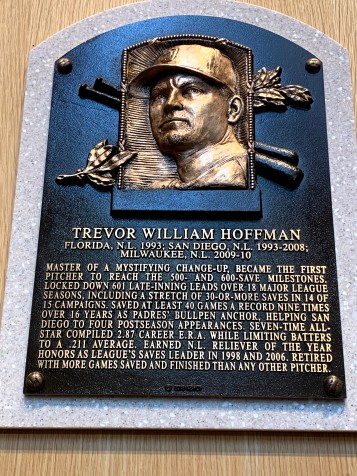 I spent about three hours in the museum. I was glad that my thought had been correct. It was not crowded and often I was the only one in a section. After I was done, I was hungry! I’d had breakfast that morning, but then only French fries and a Coke on the way. It was almost 8 pm, and a quick Yelp check led me to Mel’s at 22. I thought it would be a little more casual, but it was pretty nice and had a diverse menu. I settled on the baked haddock which came with a Caesar salad to start. The entree came with mashed potatoes and the day’s vegetable which was Brussels sprouts. I enjoyed some bread as I waited for my meal when I realized I was freezing. I was sitting right in the line of the AC. I thought I could stick it out, but I was so cold and knew I would not enjoy my meal. So I asked to move. By then, the restaurant had cleared out a bit so it was not a problem to move thankfully. After my entree, I also ordered dessert. I got the dark and white chocolate mousse cake. Here are pics of the entree and the dessert. 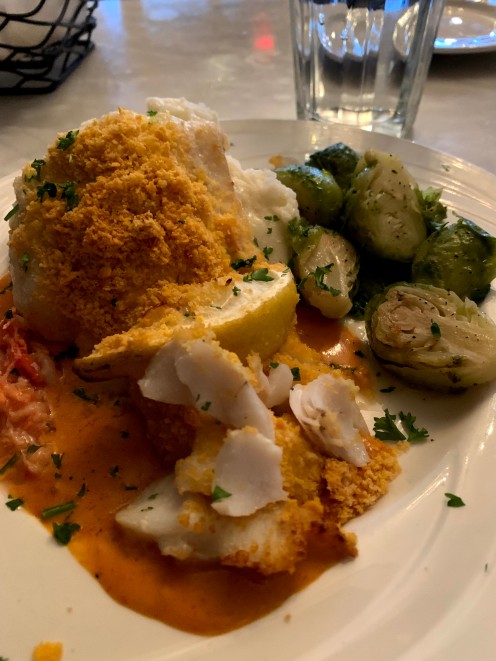 The fish was really good. It came with a lobster sauce (YUM!) and the mashed potatoes were nice and creamy. The Brussels sprouts were just okay. The mousses in the cake were good, but I didn’t care for the cake layers. When the waitress brought my check, I was stunned to find out that another table had paid for my dinner! WHAT?!?!! My total bill was just for the dessert. She said it was from a table that I had no interaction with and didn’t acknowledge in any way. I have NO IDEA why they would pay for my meal, but how about that? Nice ending to my afternoon in Cooperstown. I ended up leaving a healthy tip for my waitress so she could enjoy my good fortune a little as well.

After dinner, it was around 9 pm, and it was still kind of light. I walked up the main street a little, found a place to buy some water then headed back to my room, where I am now and have been updating this blog with the events of the last two days and watching the Tony Awards.

A nice thing about tomorrow is my drive is only about an hour and a half! I plan to sleep in, partake of the free breakfast from the Inn, take a walk, then leisurely drive on to Syracuse where I’ll stay with my poet friend, Georgia. She’s hosting a salon in her home for me tomorrow evening so that will be awesome. Until then!